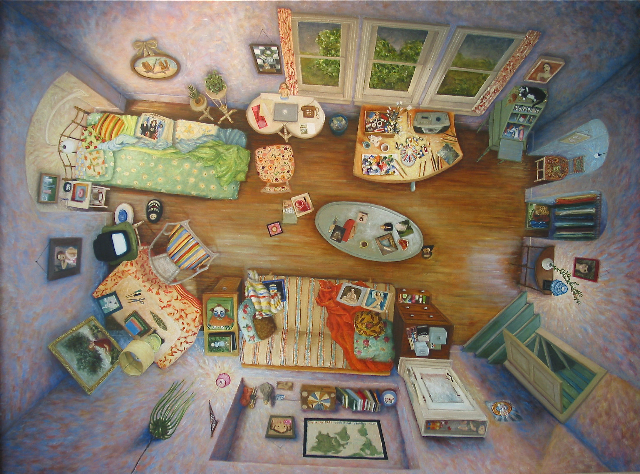 I grew up in the house of Aaron Burr’s many mistresses. An ancient brownstone that told of the past. It was possessed of a temperamental broiler that constantly broke down forcing on many mornings to heat our bath water on the stove. It created in me a sense of existing in multiple places, times, and realities all at the same moment.

My childhood tended toward odd artistic pursuits, I carved tiny flying saucers and sewed a thousand wee pillows, each methodically “designed” and given out to baffled relatives. When I was eight or so, the streets surrounding our house were closed to traffic, covered with crisp white paper, and smeared with bloody animal parts. It was a hallucinatory sight, an indelible image of the quirks of reality and it has stayed with me.

I thought it was a dream, too strange to be real.

I am fascinated by the idea of multiple truths, I want to create them, I want them to thrive in my paintings as they do in life. There is a line we straddle between dream and reality, between one truth and another.

Reality is pliable, as any criminal attorney will tell you, and for every perspective, there is a different truth.